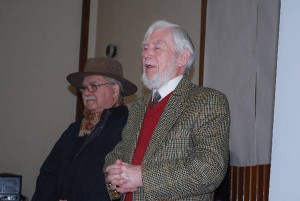 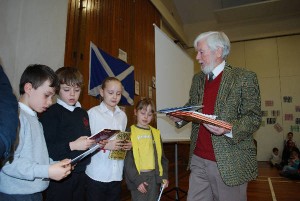 John Muir’s old school, Dunbar Burgh, some years ago split into a grammar and a primary. Dunbar Primary School is now the biggest in Scotland in terms of pupil numbers. As a result it has been divided into 2 campuses. The John Muir Campus takes the younger children from nursery to P3 and the Lochend Campus has P4 to P7. Friends of JMB decided to present both campuses with a selection of John Muir themed books for their libraries and last week past President Dan Cairney and current president JimThompson reprised their Muir and Roosevelt act to present the books. After the presentation the pupils at the Muir campus gave a very exuberant rendition of the Proclaimers song ” I would walk 500 miles and I would walk 500 more” with much stamping of feet.
Four pupils, Kayley Bamburgh, Rhian Dowding, Ewan Ramage and McKenzie Lawler, introduced ‘Muir and Roosevelt’. Their unedited introduction was as follows:-
We are very lucky because we live in the great town of Dunbar. Although lots of people from Dunbar go out into the world and do very well the most famous person from Dunbar has to be John Muir. He was born just up the road on the High Street in 1838, in fact you can visit John Muir’s Birthplace most days free of charge
But who was John Muir? Here are some facts. John was the oldest brother in a family of 5 girls and 3 boys. He started school at the age of three and went to the Grammar when he was seven. He was very adventurous, always climbing, exploring and being daring and he stayed like this when he grew up. In 1849 when he was 10 his father came in and told John and his brother Daniel not to bother with their homework because they were going to America the next morning
When they arrived in America the boys had to help build a house for the family and dig a well. John nearly died while digging. John Muir was a writer, a farmer, an inventor – we like the noisy seat he invented. All through his time in Dunbar and America he had a special love of nature. In 1867 he had an accident with a machine which blinded him and while he was in hospital he vowed that if he recovered his sight he would dedicate his life to looking after nature.
Luckily his sight returned and in 1867 he set off on a long walk- one thousand miles. He then discovered his very favourite place – Yosemite. He travelled far and wide throughout the world and had many adventures. When he returned to Yosemite years later he was shocked to find his wild place was being spoiled by farming. In 1903 he invited President Roosevelt to visit with him and they went on the most important camping trip in history. Three nights in Yosemite.. Can I now introduce 2 very special guests John Muir and President Roosevelt.

We’re going to finish our assembly by celebrating John Muir’s 1000 mile walk by singing “I would walk 500 miles and I would walk 500 more, just to be the man who walked a 1000 miles to fall down at your door.”