A Very Colourful Life
When the Scottish Government decided to mark the centenary of Muir’s death in 2014 by celebrations on his birthday, Dunbar Primary School resolved to be involved. After all, DPS is descended from the school he attended in Dunbar and is the only school that can claim Muir as a former pupil. When the Muirs emigrated to Wisconsin in1849 there were no school for the state was new and part of the American frontier. When schools were built, John as the oldest boy could not be
spared from farm work.
The pupils and staff had to mark his life with something really spectacular. But what? It was a parent-member of the DPS School Council who had the brilliant idea which would involve every class. Eden Blair had lived in Oregon and knew the story of Muir’s life. Could the school somehow recount the story of Muir’s life?
There were 34 classes, so Eden selected 34 key events in Muir’s life and wrote a couple of sentences describing each. Scraps of material, buttons, coloured tape and the like were collected divided up into 34 bundles. Then an event, a bundle of bits, a square metre of canvas, and the challenge to produce a collage illustrating their event were given to the teacher of each class.
Pupils and teachers set to with enthusiasm and inspiration to turn Eden’s words into a picture and gradually 34 original panels began to take shape, each a page in Muir’s very colourful life. On 21 April 2014, they made their first public appearance as part of Dunbar’s John Muir Centennial celebrations.
Then, in early February of this year, Friends offered to finance the production of a book which would make the panels available to a much wider audience. A text to accompany the illustrations would provide a young person’s biography of John Muir.
Professional photographer Rob McDougall, himself a DPS former pupil,
photographed the panels and donated copies of his images. Emma Westwater, of Source Design, who has been involved in all but one of our books, was enlisted to design the 72-page book. A final proof was delivered to the printers in April 2015.
The print run was 3,500 with each of the county’s 34 primary schools receiving a free class set. DPS received an additional 1,000 copies. Selling at £5 per copy, these will provide the school with the resources to maintain the panels for the future.
Copies are available from Dunbar Primary School and John Muir’s Birthplace, or by post by sending a cheque for £6 (£10 overseas for p&p) to Friends, John Muir’s Birthplace, 126 High Street Dunbar EH42 1AQ 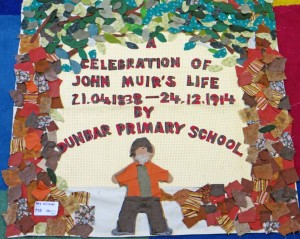